About the MDIS Education Trust Fund:

The MDIS Scholarship and Bursary Awards ceremony is a major event in the MDIS Education Trust Fund calendar. To date, MDIS has disbursed scholarships and bursaries totalling S$6.3 million, benefiting more than 8,000 students.

2019: As part of MDIS' endeavour in supporting needy and deserving students, MDIS awarded over $250,000 in scholarships and bursaries to 400 needful students at its 24th MDIS Scholarship and Bursary Awards Ceremony on 25 May 2019.

MDIS continues to increase its bursaries for special education (SPED) schools this year, awarding a total of 37 students from 13 different SPED schools. Additionally, two S$5,000 special bursary were awarded to two students facing exceptionally challenging family situations which could force them out of school without timely financial assistance. 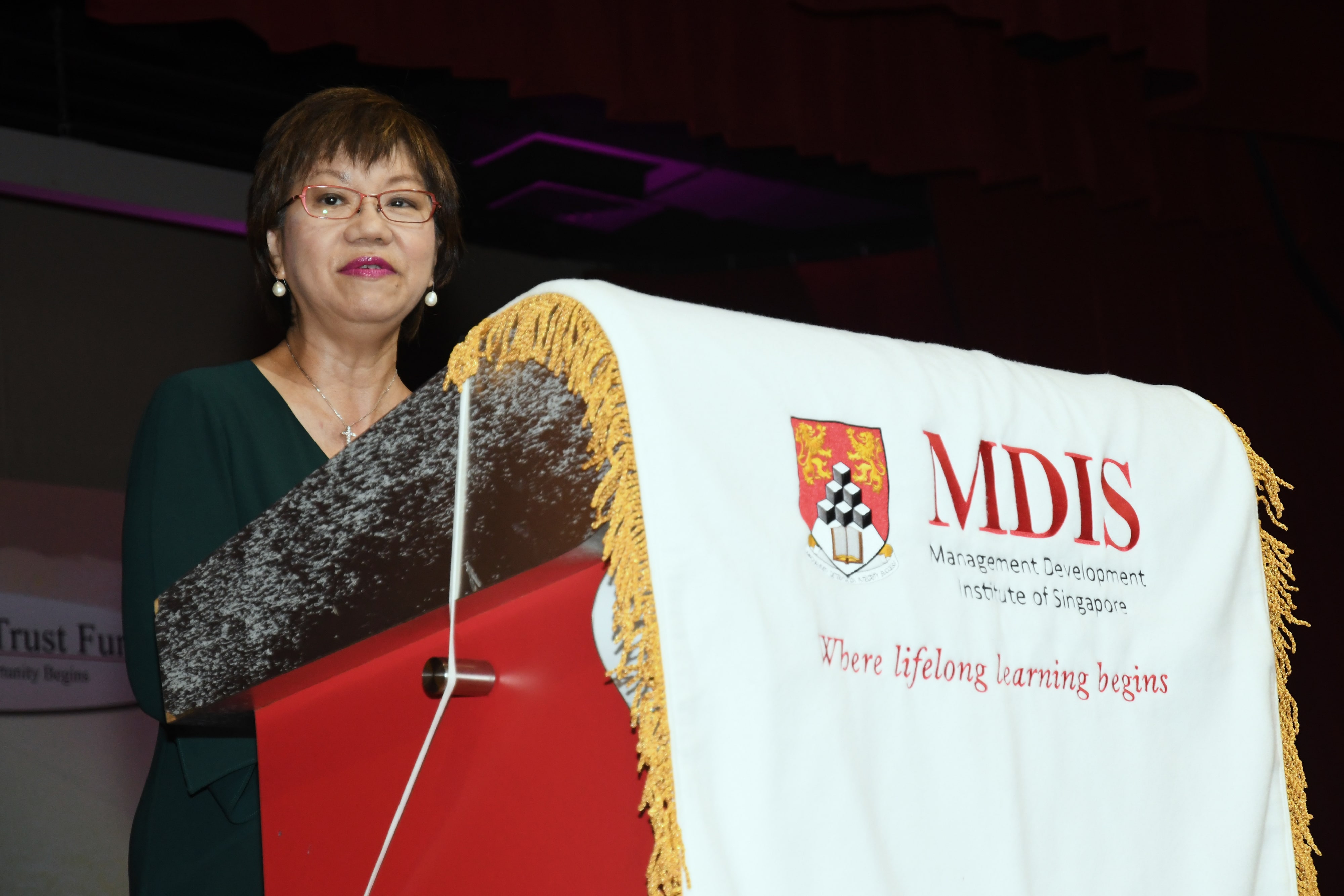 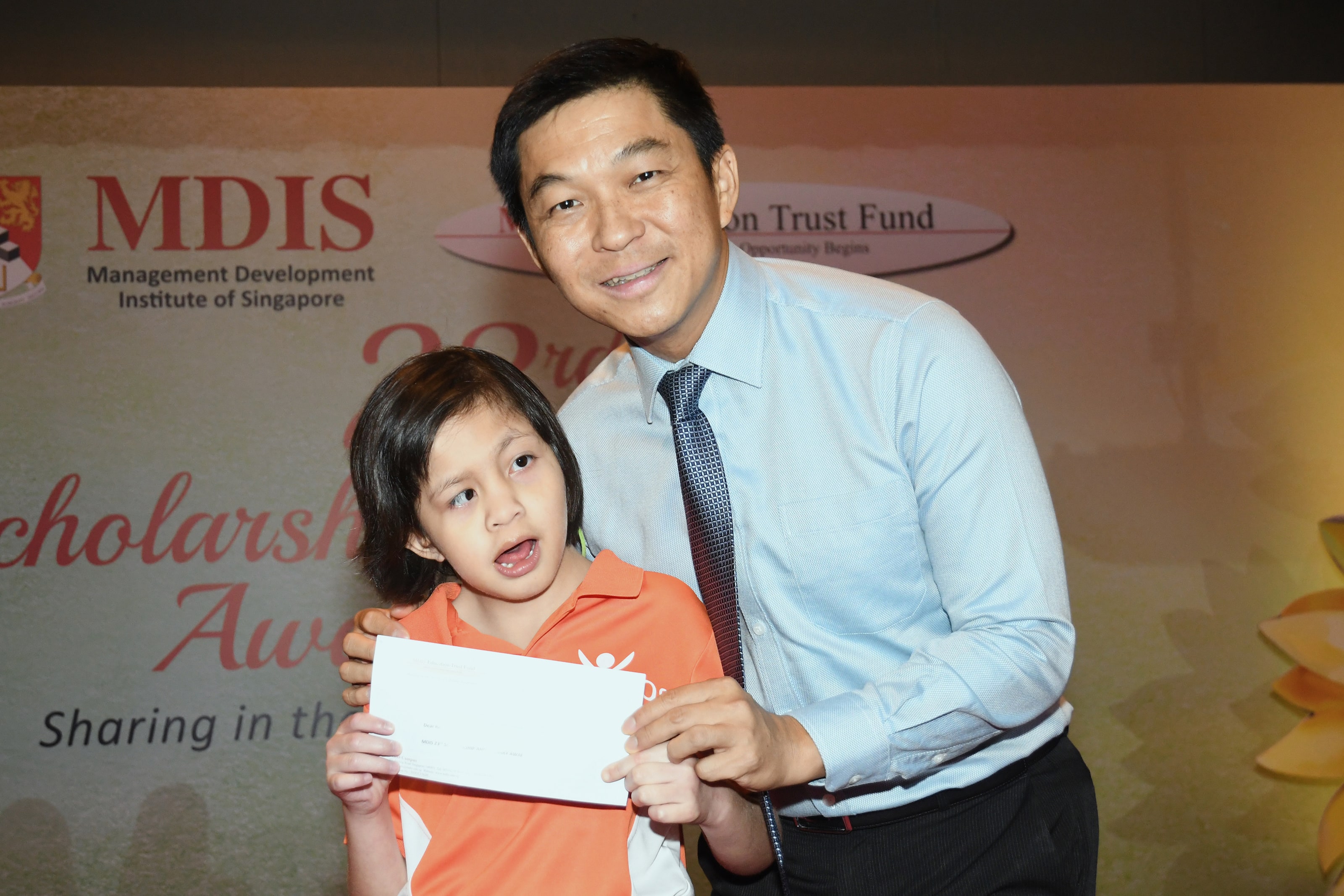 2018: Following a tradition of philanthropy since its establishment 61 years ago, MDIS awarded $230,000 in scholarships and bursaries to over 400 deserving and needful students at its 23rd MDIS Scholarship and Bursary Awards Ceremony on 26 May.

This year, bursaries worth S$18,000 were awarded to 36 children from Special Education Schools. Initiated two years back at its 60th Anniversary, MDIS has awarded 112 bursaries worth about S$50,000 to date to children from Special Education Schools. Additionally, a S$3,000 special bursary was awarded to a recipient to extend an extra helping hand to her family. 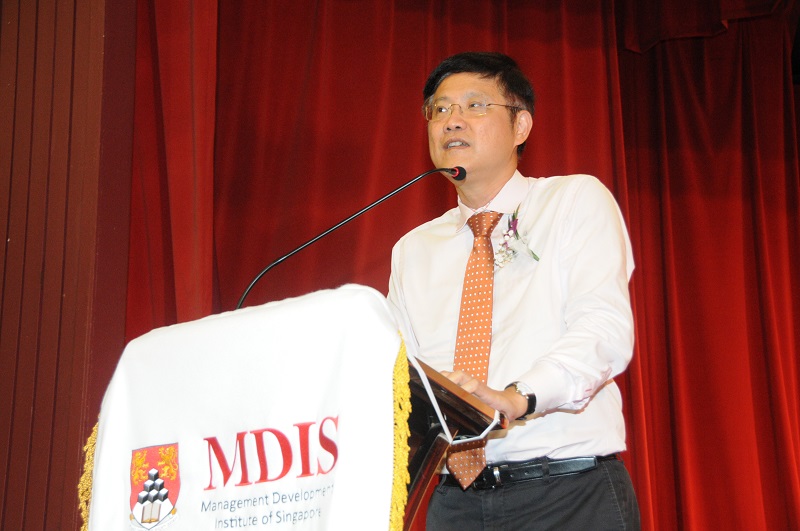 In a demonstration of its strong commitment in helping deserving and needful students develop to their fullest potential, the institute awarded special bursaries worth S$5,000 each to two recipients to extend extra help to them and their families.

MDIS awarded other bond-free bursaries to 371 local students from secondary, post-secondary and tertiary levels; and 17 local and international recipients for their pre-degree and degree studies. Graced by Ms Foo Mee Har, Member of Parliament for West Coast GRC, the event was attended by over 1,600 students, accompanying teachers and parents. Close to S$400,000 worth of scholarships and bursaries were handed to 484 students from Institutes of Technical Education (ITE), Secondary Schools, Junior Colleges and Polytechnics on the day. 2015: On 23rd May, MDIS presented 850 students with scholarships and bursaries worth close to S$800,000 at its annual Scholarship and Bursary Awards Ceremony. Held at Raffles City Convention Centre, the ceremony was graced by Ms Grace Fu, Minister of the Prime Minister’s Office, Second Minister for Environment and Water Resources, and Second Minister for Foreign Affairs.

The ceremony marked a new award category that the Institute was launching this year. Named the MDIS SG50 Special Bursary in commemoration of Singapore’s golden jubilee, the award aims to give 150 deserving Primary Six students a cash prize of S$250 each, for a total value of S$37,500. 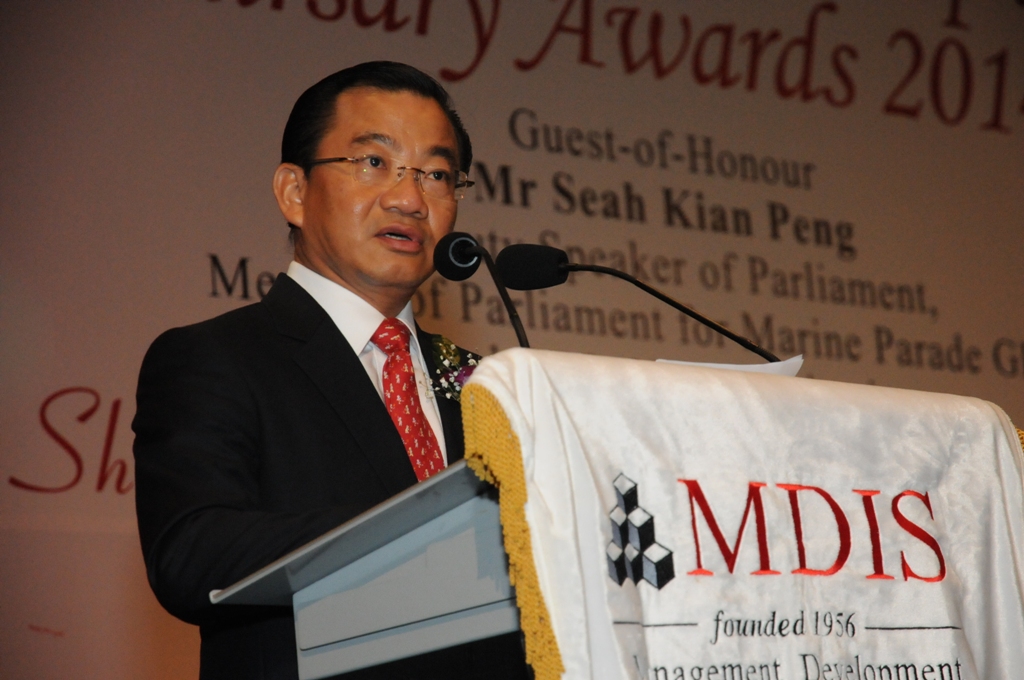 2014: In line with its vision to provide learning opportunities for all regardless of background, MDIS held its annual Scholarship and Bursary Awards Ceremony in the Fairmont Ballroom at the Raffles City Convention Centre.

Attended by more than 2,000 guests, the event was graced by Guest-of-Honour Mr Seah Kian Peng, Speaker of Parliament, Member of Parliament for Marine Parade GRC and CEO of NTUC Fairprice Cooperative. 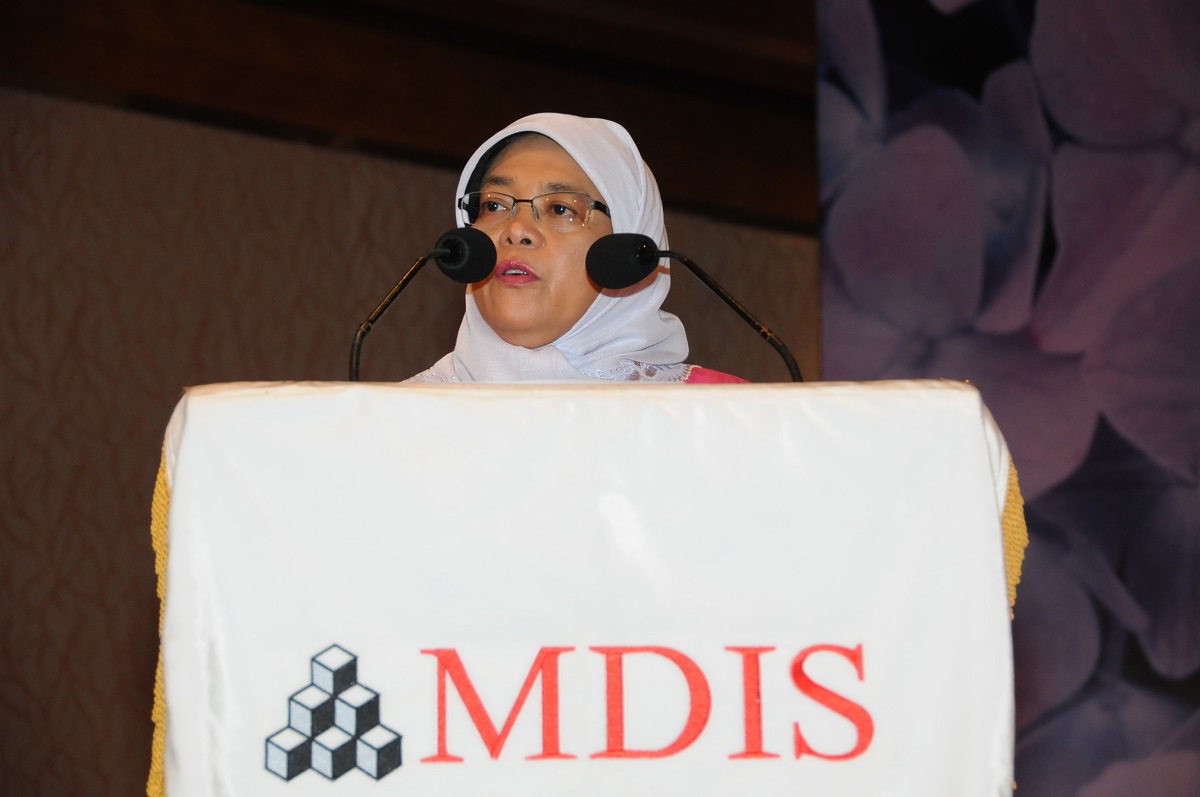 “We must strive towards providing learning opportunities for all, regardless of background, to pursue education and career goals so as to achieve success in both spheres.” 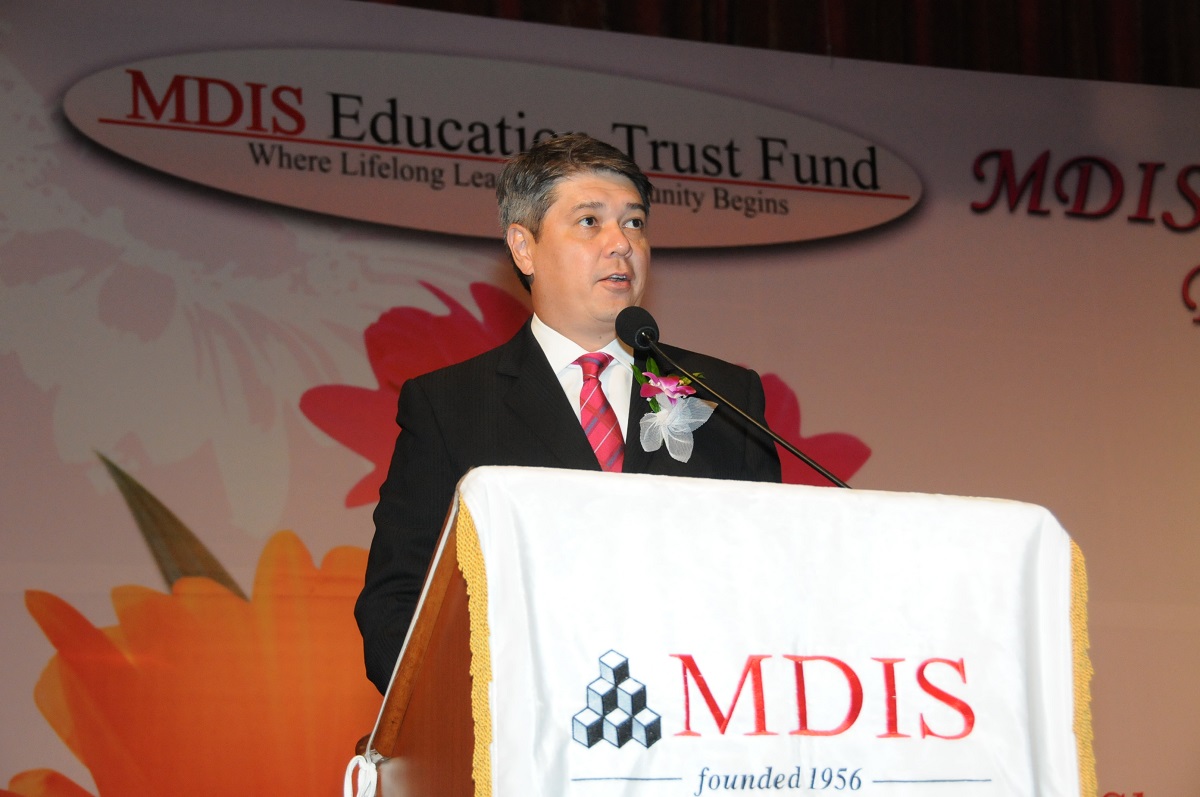 2012: MDIS proudly awarded a S$30,000 Leap Year Baby Scholarship to Adel Bin Mohamed Khidir, the first leap year baby born in 2012, to pursue a degree programme jointly offered by MDIS and its university partners. Introduced in 2004, this is the third time that the scholarship has been presented.

Upholding the spirit of giving, scholarships, study grants and bursaries worth a total of S$485,000 were awarded to 565 recipients at the 17th MDIS Scholarship and Bursary Awards Ceremony. 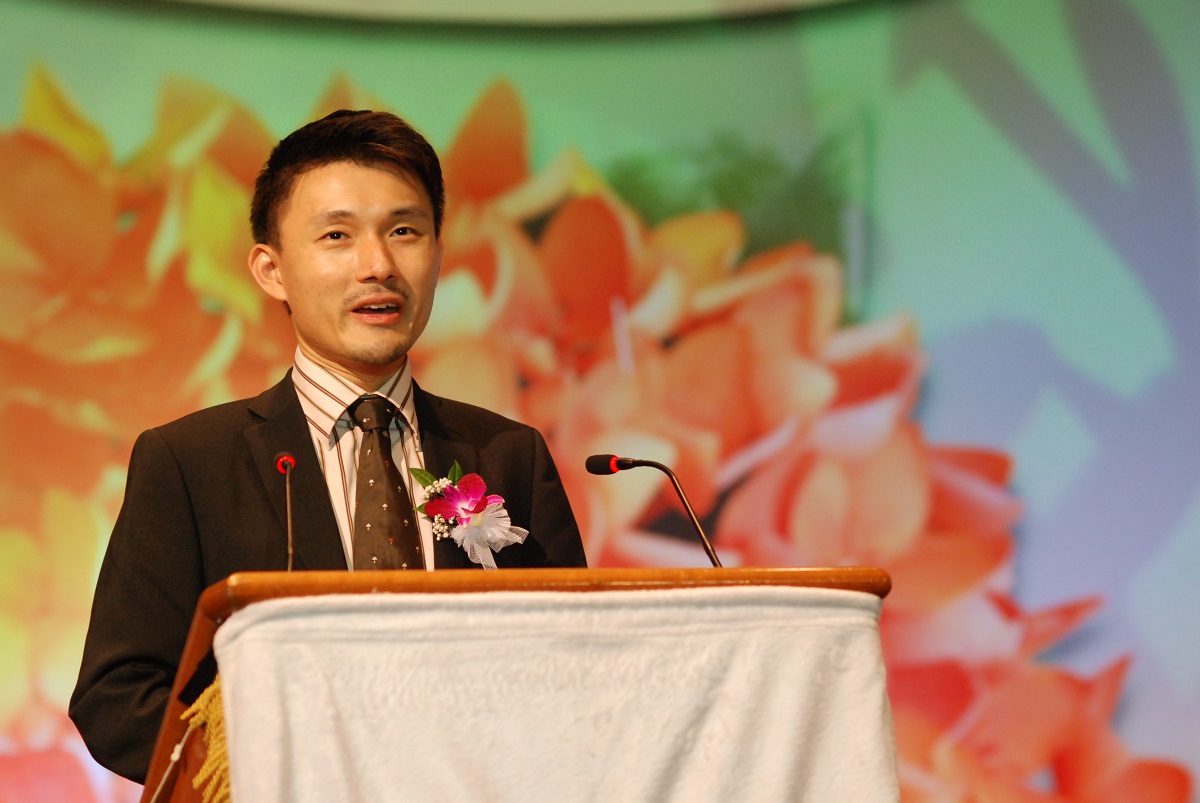 2011: MDIS awarded scholarships and disbursed bursaries worth approximately S$450,000 to 536 receipients at the MDIS 16th Scholarship and Bursary Awards Ceremony, with Member of Parliament for Tampines GRC, Mr Baey Yam Keng as Guest-of-Honour. 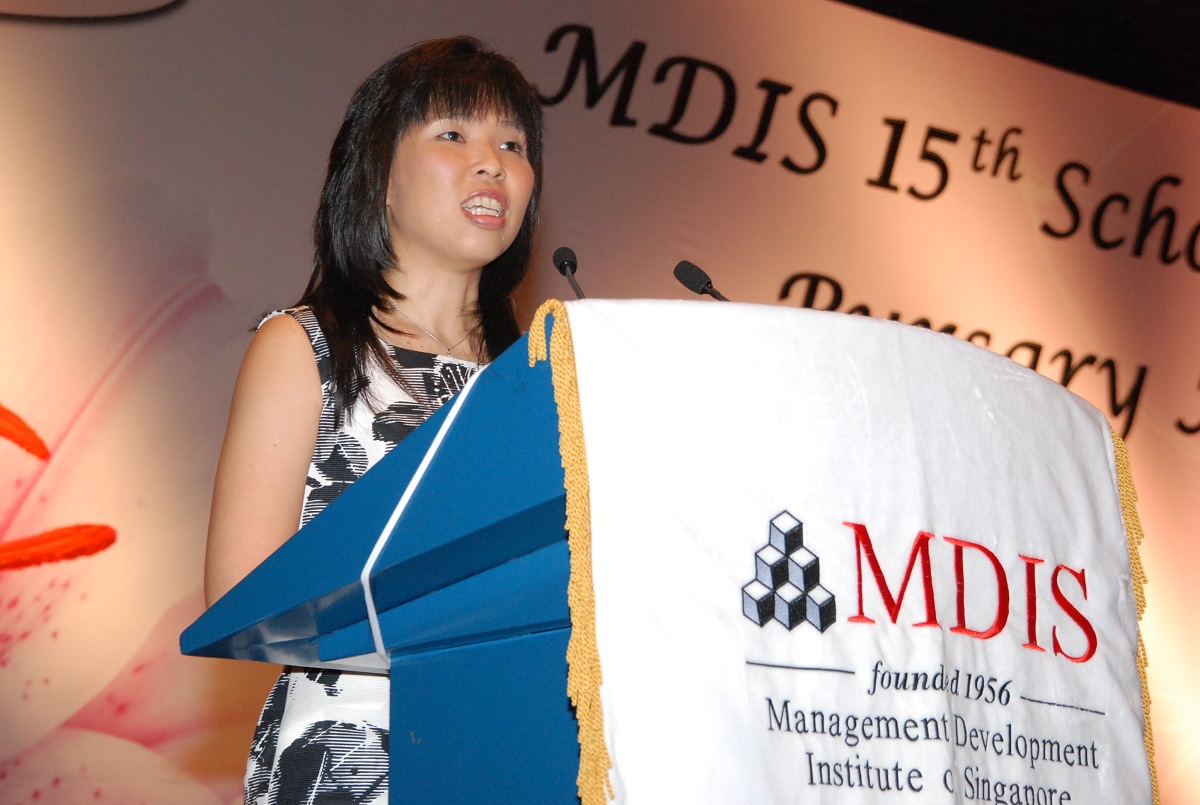 2010: On 24th April, MDIS awarded scholarships and disbursed bursaries worth approximately S$500,000 to about 600 recipients at the 15th Scholarship and Bursary Awards Ceremony 2010.

Ms Jessica Tan, Member of Parliament for East Coast GRC, was the Guest-of-Honour. 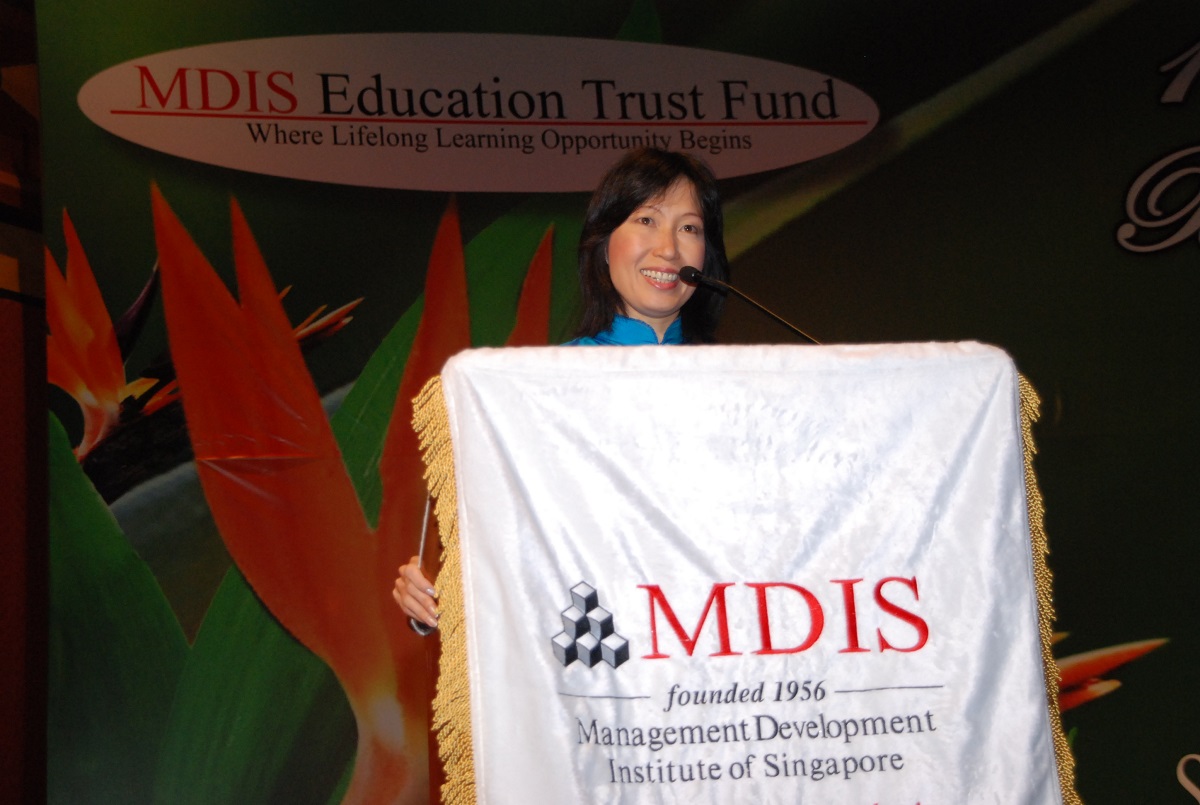 2009: A cheque for S$250,000 was presented by Dr Eric Kuan, President of MDIS, to His Excellency President S R Nathan during his visit to MDIS Campus on 19th January. The amount was a donation from MDIS to the President’s Challenge 2009, kick starting its philanthropic activities for the year.

MDIS 14th Scholarship and Bursary Awards Ceremony was held at the Raffles City Convention Centre on 16th May. Students from Secondary Schools, Polytechnics, Junior Colleges and Institutes of Technical Education (ITEs) all over Singapore attended the event. Despite the recession, MDIS remains resolute to its commitment to education and philanthropy. MDIS disbursed approximately S$450,000 worth of scholarships and bursaries. 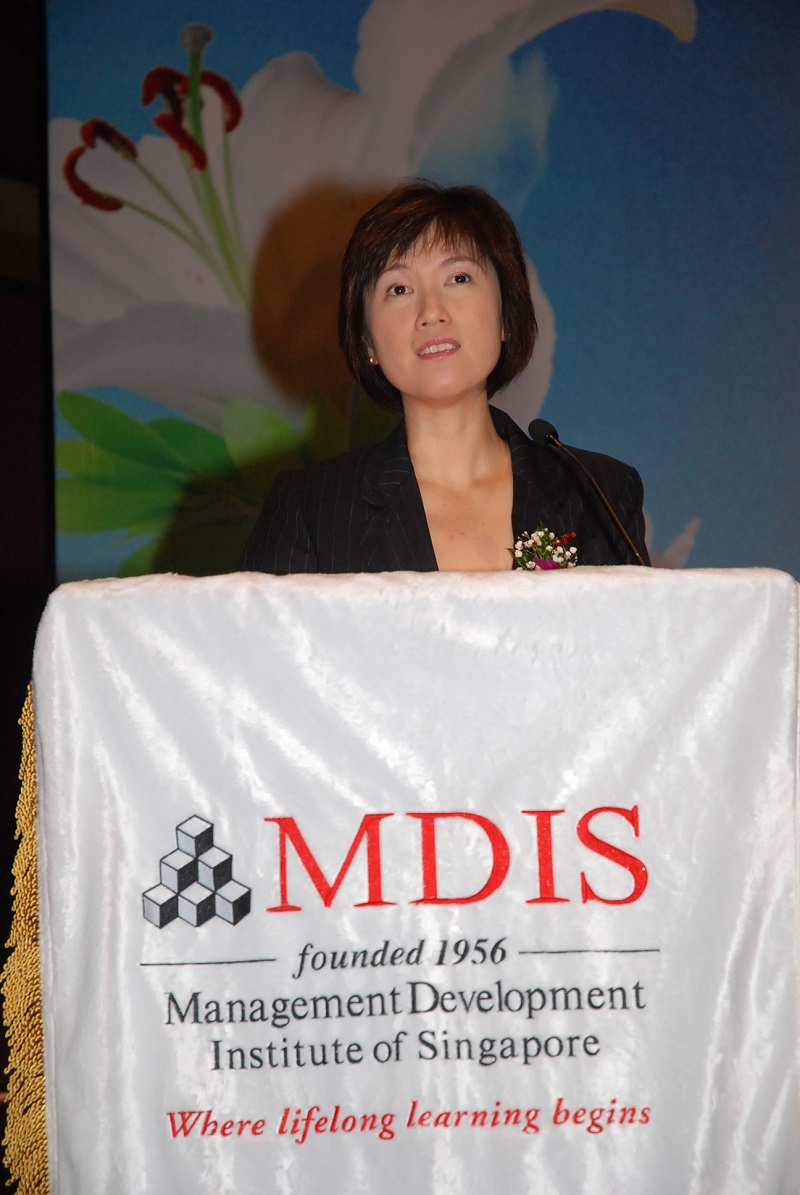 MDIS took part in the National Youth Achievement Awards project entitled ‘Trees in Istana’ as part of the President’s Challenge. MDIS donated S$6,000 to purchase two photographs depicting the greenery on the grounds of the Istana, the official residence of His Excellency President S R Nathan.

Funds from the Trust are disbursed through Scholarships and Bursaries to the less fortunate but academically deserving students to help them achieve their academic dreams and success. MDIS disbursed approximately S$378,000 worth of scholarships and bursaries. 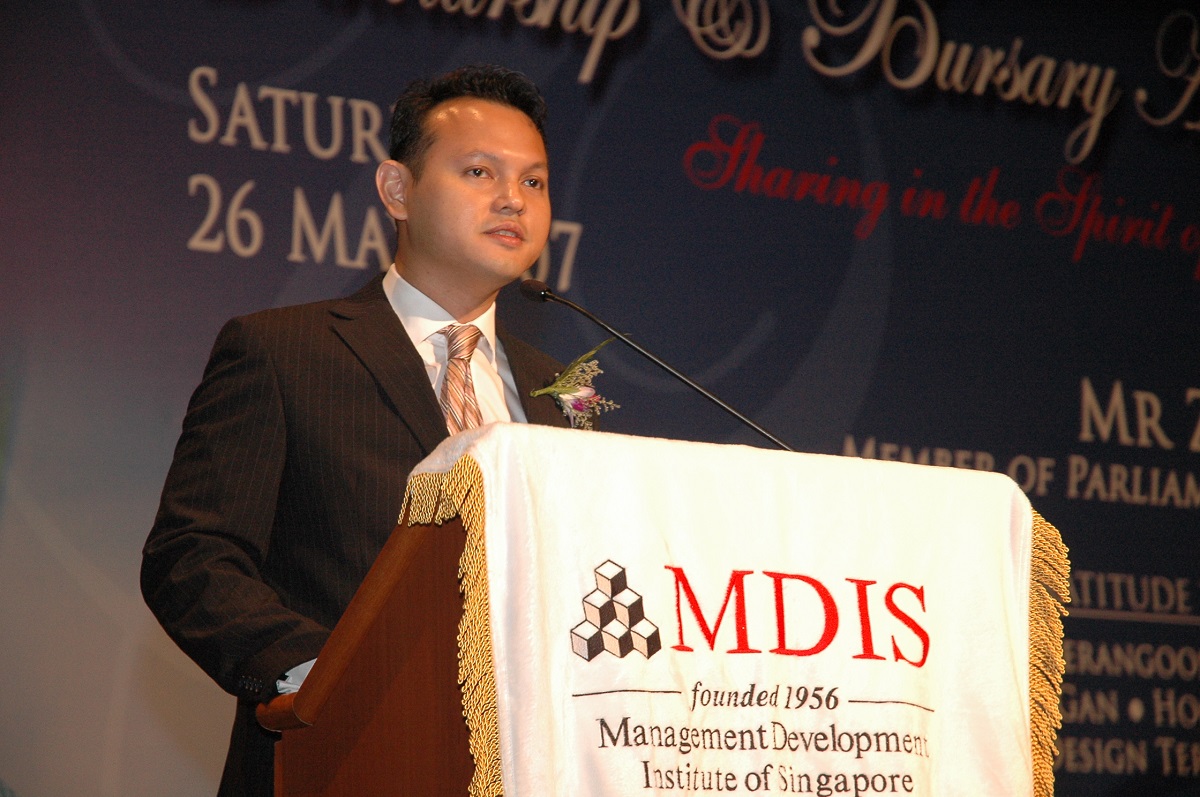 2007: MDIS continued its tradition of helping needy and deserving students who have financial difficulties in pursuing their education. A total of 605 scholarships and bursaries, amounting to nearly S$300,000, were given out on 26th May.

2006: MDIS held its Scholarship and Bursary Awards 2006 ceremony at the Raffles City Convention Centre on 5th June, where 31 scholarships and 578 bursaries worth more than S$250,000 were presented. The scholarships benefited individuals through organisations like the self-help groups, HomeTeamNS, Singapore Armed Forces Reservist Association (SAFRA), the People’s Association (PA) and the National Trades Union Congress (NTUC). The bursaries were given to students from Secondary Schools, Polytechnics and the Institute of Education.

Mrs Yu-Foo Yee Shoon, Minister of State for Community Development, Youth and Sports, was the Guest-of-Honour.

2005: MDIS held its Scholarship and Bursary Awards 2005 ceremony at the Raffles City Convention Centre on 4th June. The Guest-of-Honour was Mrs Lim Hwee Hwa, Minister of State for Finance and Transport and Member of Parliament for Marine Parade GRC. Nineteen (19) Scholarships and 352 Bursaries worth S$185,850 were presented. The Scholarships benefited individuals through organisations such as the four self-help groups, HomeTeam NS, Singapore Armed Forces Reservist Association, People’s Association (PA), and National Trade Union Congress (NTUC). The bursaries were presented to students from Secondary Schools, Polytechnics and Institutes of Technical Education (ITEs).

Mrs Lim Hwee Hua, Minister of State for Finance & Transport and Member of Parliament for Marine Parade GRC, was the Guest-of-Honour.

2004: MDIS started the Leap Year Baby Scholarship which is a degree scholarship awarded to the first leap year baby born in Singapore on every 29 February. Sponsored by the MDIS Education Trust Fund, the scholarship has a value of S$30,000. Tim Shee Zhe Guang became one of Singapore’s most fortunate leap year babies in 2004.

Besides to giving out more than S$176,000 worth of Scholarship and Bursaries, MDIS donated S$25,000 to the President's Challenge 2004. MDIS also organised and fully pay for an enrichment camp for over 100 Primary Six pupils from centres in the North and East zones. This programme was part of the MENDAKI Tuition Scheme. In addition, MDIS organised a Car Wash Charity Drive. In total, students and MDIS staff raised, within five weeks, over S$22,000 for the Straits Times School Pocket Money Fund and the MDIS Education Trust Fund.

Mr Abdullah Tarmugi, Speaker of Parliament, was the Guest-of-Honour.

During the ceremony, MDIS presented Esteemed Friend of MDIS awards to Datin Lee Chee San and Dr Lee Seng Gee, Chairman of Lee Foundation, for their tireless efforts and invaluable support to the Trust Fund and the Institute in many ways.

2002: The MDIS Education Trust Fund Charity Draw took place in June 2002. It was to raise funds for the disbursement of more scholarships and bursaries. More than S$110,000 was raised through the Draw. The Trust Fund offered 400 bursaries in 2002.

Mr Chan Soo Sen, Minister of State, Prime Minister’s Office and Ministry of Community Development and Sports, was the Guest-of-Honour.

2001: Despite the economic downturn, a quarter of a million dollars were disbursed in the form of bursaries and scholarships. The Trust Fund offered 500 bursaries to GCE 'N', 'O', and 'A' Level students, ITE and Polytechnic students. Scholarships were also awarded to individuals through the various organisations.

Mr S Iswaran, Member of Parliament for West Coast GRC, was the Guest-of-Honour.

2000: MDIS extended scholarships to the National Trades Union Congress (NTUC). Through the Trust Fund, an exceptional number of 600 bursary awards were disbursed jointly with other organisations, which were committed towards education and community service.

Assoc Prof Ho Peng Kee, Minister of State for Law and Home Affairs, was the Guest-of-Honour.

1999: The MDIS Education Trust Fund was established on 1st February. Initial funding came from MDIS' surplus (S$500,000) in the past year, as well as a generous contribution from Lee Foundation.

In addition, MDIS and its partner Oklahoma City University, jointly organised a fundraising performance. Proceeds went to the Trust Fund and The Society for the Physically Disabled equally.

1998: In October 1998, MDIS pledged a S$30,000 donation to the Clementi Student Service Centre. Given out over a three-year period, the fund assisted in providing a conducive study environment for students from low-income families. The centre was the first of its kind to be managed by students from the Singapore Polytechnic, and was a joint community project of Tanjong Pagar CDC, Clementi Citizens Consultative Committee and the Singapore Polytechnic.

Dr Yaacob Ibrahim, Parliamentary Secretary, Ministry of Communications and Member of Parliament for Jalan Besar GRC, was the Guest-of-Honour.

Mr Sidek Saniff, Senior Minister of State for the Environment, was the Guest-of-Honour.

1996: For the first time in commemoration of MDIS' 41st Anniversary, MDIS offered scholarships to the four self-help groups (CDAC, Yayasan MENDAKI, SINDA and The Eurasian Association).

The aim of the scholarships was to offer opportunities to young professionals of the various ethnic groups to upgrade their academic qualifications and to enhance their knowledge and skills for lifelong employability.