Dinosaur, a word that means ‘Terrible Lizard’, last walked the Earth 65 million years ago. When speaking of dinosaurs, the first image that comes to mind is probably the infamous Tyrannosaurus rex that lived in the late Cretaceous period. It is hard to imagine if a terrifying creature such as the T-rex had a compassionate nature to nurture its young. So that notion begs the question: Were dinosaurs nurturing parents? Or were they as atrocious as their terrifying nomenclature? 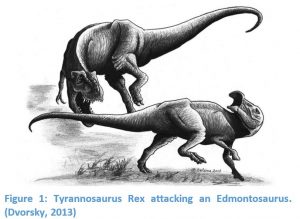 To understand more of dinosaur behaviour, the behaviour of modern creatures closely related to the dinosaurs could provide some clues. Contrary to popular belief, the dinosaurs are more closely related to the modern day birds than to living reptiles such as the alligator or the crocodile. A tiny shred of protein from a 68 million-year-old T-rex leg was compared to the 21 modern species which still produce the same protein. And the researches had confirmed that the giant predator was closely related to chickens and ostriches than crocodilians. While anatomical studies had produced convincing evidence of the link between birds and dinosaurs, this is the first time that studies had traced a relationship via molecular analysis of animal protein. And this discovery provided the first molecular evidence for the evolutionary relationships from a non-avian dinosaur to modern birds. The research also provides evidence that birds descended directly from a group of dinosaurs that grew feathers. 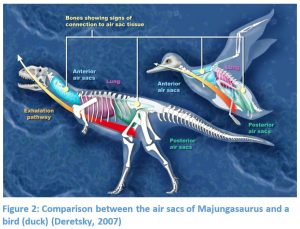 Having established that modern day birds are descendants of the extinct dinosaurs, we can surmise how dinosaurs would have raised their young. The young of most egg-laying reptiles hatch after their parents have abandoned the eggs, while a few lizards and snakes guard theirs and pythons tend to incubate their eggs for a short while. Only crocodiles and their relatives had been observed tending to both eggs and hatchlings. On the contrary, nearly all birds, aside from brood parasites, provide extended care for their offspring. It can then be postulated that dinosaurs may share similar instincts to care for their young. 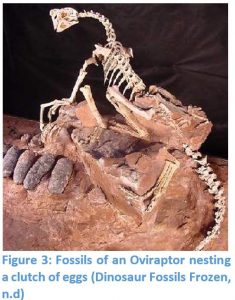 Studies had shown that certain dinosaurs such as the troodontid and the oviraptorid display similar reproductive attributes with birds such as multilayered eggshells, asymmetric eggs and monoautochronic ovulation. Adult Troodon formosus, Oviraptor philoceratops, and Citipati osmolskae had been discovered fossilised with bird-like brooding postures atop egg clutches.

Oviraptor, whose name translates from Latin into ‘egg thieves’, was aptly named after being discovered with eggs that were assumed to be from the small ceratopsian dinosaur, Protoceratops. It was assumed that Oviraptor stole and ate other dinosaurs’ eggs. However, studies had shown that those eggs actually belonged to Oviraptor, with evidence that the species, in reality risked their lives for their young! For the dinosaur to be caught in the act suggests strong parental instincts to protect their young. 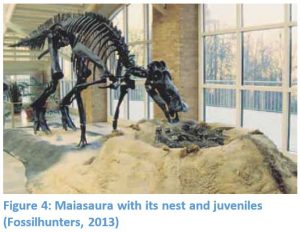 Just as the modern day herbivores, whose young have the ability to walk and run, hours and even minutes after birth, the young of prehistoric herbivores such as sauropods and titanosaurs were also believed to bear young equipped with developed mobility. Modern birds care for their newborns in specially prepared nests, suggesting that some feathered dinosaurs might had done the same, probably in specific birthing grounds. Numerous fossils of Maiasaura, an herbivore, were found to consist of eggs, hatchlings, juveniles and adults in the same site. Further analysis of the fossils demonstrated that Maiasaura possessed immature leg muscles, and might be incapable of walking when born. Research showed that Maiasaura teeth had evidence of wear and tear, and could imply that the adults brought food to the nest to care for their young until they were old enough to fend for themselves. Similar behaviour had been recorded in other herbivorous dinosaur groups such as the ceratopsians, hadrosaurs and ornithischians.

Analysis of Troodon fossilised clutches hinted that males incubated the eggs instead of females, similar to the modern day cassowaries. Evidence of male brooding was also found in the distantly related Troodon cousins, Oviraptor and Citipati.

With over 700 species of dinosaurs identified so far within the Mesozoic Era, which comprises the Triassic, Jurassic and Cretaceous periods, there is plenty of evidence to show that dinosaurs did care for their young. However, we have yet to fully comprehend the whole range of dinosaur behaviour, and our current understanding of dinosaur social interactions remain ambiguous.