Despite great advances in biomedical research technologies, the use of animals cannot be replaced by modern techniques and animal systems still have an important role in dissecting medical mysteries, namely in disease monitoring and therapeutic development.

Animals are good models for disease studies and development in biological and medicinal research, as they share similar DNA, physiological and behavioural characteristics as humans. Initially, murine (rodent) models were used as they are easy to house, breed and handle. However, in order to study cardiovascular diseases that plague humans, a larger species has to be used. Dogs were the first of the larger animals representing a model for cardiovascular diseases; however, in recent years, the pig model is more favoured. 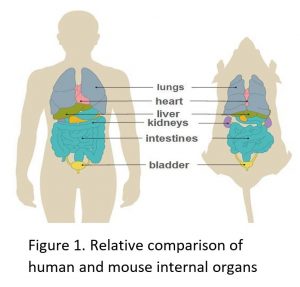 Pigs and humans share a vast range of similarities, which make pigs a well suited model to study cardiovascular diseases. Firstly, pigs have an average heart rate of 90-107 beats per minute (bpm), mimicking a human’s average heart rate of 70-100 bpm. The general cardiovascular systems, blood parameters, vessel size, coronary vasculature, body size, metabolic rates, lipid profiles and even diet are similar to humans. Comparing with humans, 60% of the circulating cholesterol in porcine is presented as low density lipoproteins and 38% as high density lipoproteins, almost identical to humans at 63% and 28% respectively.

Despite many similarities, pigs and humans do exhibit certain differences, which may be the limiting factors in research. The number of orifices in the left atrium varies among mammals. The pig receives oxygenated blood from two pulmonary veins in the left atrium; the human receives oxygenated blood from four to five pulmonary veins in the left atrium. The thorax of pigs is laterally compressed, unlike the thorax of humans which are dorso-ventrally compressed. In addition, a pig’s heart has a narrow tubular-shaped right auricle, while a human has a triangular shaped auricle. 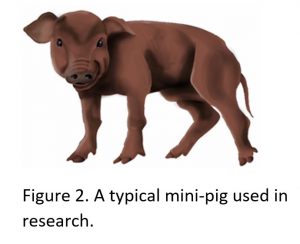 The pig was domesticated in 9000-7000 BCE, and had been used in research for a long time. Some major breakthroughs which involved the pig, included isolation of embryonic stem cells, zinc finger nucleases (ZFN) identification and transcription activator-like effector nucleases (TALEN) genome. And the new technology of genome editing; Clustered, Regularly Interspaced, Short palindromic Repeats (CRISPR) together with CRISPR associated (Cas) nucleases (CRISPR/Cas).

Pigs are the animal of choice for modelling human diseases, and advanced genetic techniques are being developed to simplify the production of genetically engineered pigs, designed to replicate human diseases. The species of pigs are selected based on the ratio of heart weight to body weight, often in 20-30kg pigs, in which the ratio is identical to adult humans at 5g per 1 kg.