With the revival of DC comics and the Marvel superhero series, it seems that superheroes are not only filling our big screens with their latest string of blockbuster hits, paraphernalia, and need I mention, their incredible super powers, but, it turns out that they may even have a hand in cancer genetics. If you have ever wondered if there is a link between superheroes, science, and the human genome, this article may be as close as it gets.

The THOR (ENSG00000226856) gene, otherwise known as Testis-associated Highly-conserved Oncogenic long non-coding RNA, was discovered by researchers from the University of Michigan’s Comprehensive Cancer Centre. It was recently revealed in their December 2017 Cell publication, as a novel, ultraconserved long non-coding RNA region that is expressed not only in humans, but also in mice and zebra fish. Previously considered as the ‘dark matter’ of the human genome, little is known of these long non-coding RNA regions.

Director of the Michigan Centre for Translational Pathology and Professor of Pathology at Michigan Medicine, Arul Chinnaiyan (M.D., PhD.) and his research team, are the powerful minds behind this discovery. They are the first group to identify and characterise this gene, which is exclusively expressed in the testes and in a subset of cancers, with little to no expression in other types of adult tissue. 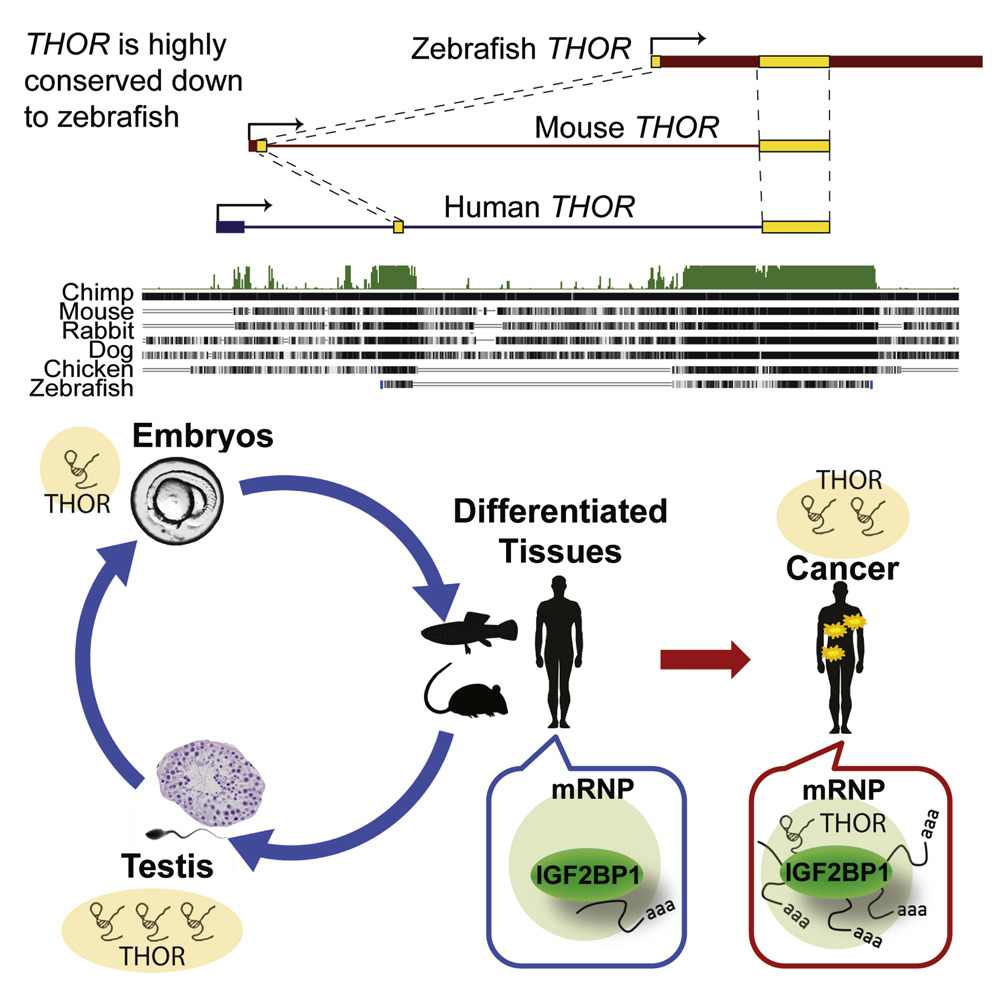 These investigators reasoned that the structure and function of THOR, having undergone positive evolutionary selection over time, and, being highly conserved in 3 species, is likely to play an important role. Chinnaiyan and his team were able to demonstrate this, reporting that THOR knockdown and over expression in multiple cell lines and animal models conferred with alterations in cell or tumour growth; they reported that while transgenic THOR knockout zebrafish resulted in fertilisation defects and resistance to melanoma onset, ectopic expression of human THOR exacerbated the melanoma. Furthermore, the investigators demonstrated that insulin-like growth factor binding protein, IGF2BP1, activity was inhibited following knockdown of THOR, proposing that IGF2BP1 mRNA is in part stabilised by THOR. Accordingly, perturbation of IGF2BP1 RNA stability would consequently disrupt cell proliferation and result in tumour growth cessation.

Discovery of THOR has opened up an exciting and new platform for cancer therapeutics and may change our approach towards cancer treatment. Chinnaiyan and colleagues have identified THOR as a potentially ideal target for cancer drug development therapies, as blocking or inhibiting THOR does not have an impact on normal cells, offering promising results for fewer adverse effects.

Through their discovery of this novel gene, Chinnaiyan and colleagues have shone a new light on what was previously unknown and considered ‘dark matter’. Their work on THOR has unveiled the potential role of highly conserved long non-coding RNA regions in carcinogenesis. Future studies on the thousands of other long non-coding RNA regions may provide further insight into the pandora’s box that is the human genome. With their current plans to investigate the use of antisense oligonucleotides to bind to and knockdown THOR, it appears that the Norse god of thunder’s hammer could indeed reign down on cancer sooner than we think.

Michigan Medicine – University of Michigan. (2017, December 14). How defeating THOR could bring a hammer down on cancer: Researchers identify and characterise a new type of RNA protein called THOR that plays a role in cancer development. ScienceDaily. Retrieved December 14, 2017 from www.sciencedaily.com/releases/2017/12/171214140837.htm