Human mini-brains and why developmental biology is interesting

In the latest issue of Nature Biotechnology published on 16 April 2018, neuroscientists at the Salk Institute for Biological Studies in La Jolla, California, have demonstrated a critical step in advancing scientific research by successfully implanting human mini-brain into a mouse brain which can integrate with the host brain at the physiological level.

Where do these human mini-brains come from? Human mini-brains or brain organoids, are brain-like tissues grown from stem cells derived from human skin cells. Extensive research worthy of a Nobel Prize (awarded in 2012) has shown that given the right biochemical stimuli, human skin cells (among many other cell types) can be reversed to a state of ‘stemness’ which has the potential to become any other cell type. Current research has taken stem cell research a few steps further, not only merely from skin cells to stem cells but also to direct these stem cells into different types of brain cells which then organise into a three-dimensional brain, albeit a ‘mini’ one. 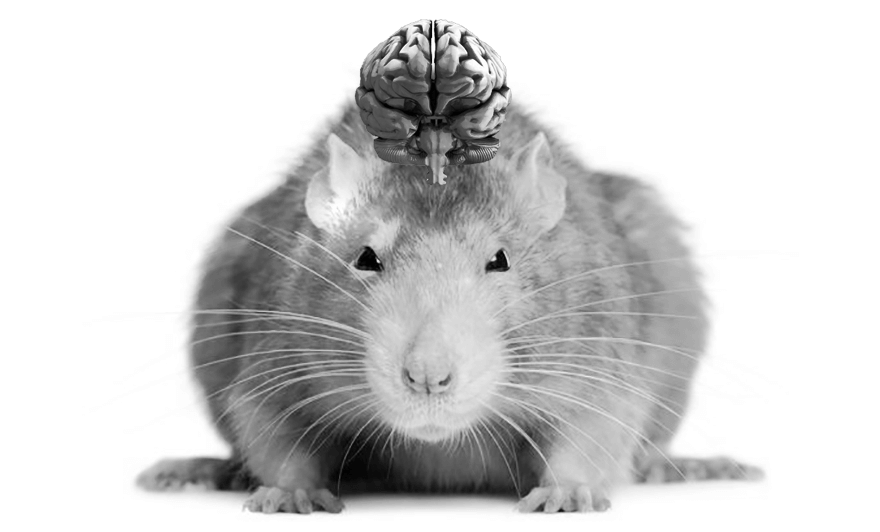 Why would scientists want to place human brain organoids into mice? In short, it is for the better understanding of the enigmatic process of human brain development and related neurological disorders. There are more than 600 known neurological disorders awaiting a cure or at least improved therapeutic options according to University of California San Francisco Health. Since no human being is going to volunteer his or her brain for scientific research, scientists for the longest time have been resorting to using cell cultures of human or animal neuronal cells for research. However, cell cultures, a two-dimensional system, are limited in providing enough information for thorough study. Animal models from the fruit fly to the zebrafish to the most recognised rodents, each exhibit their own merits and demerits in modelling human brain diseases. As much as these aforementioned approaches have yielded valuable insights, species differences exist and that is why neuroscientists have been working on growing ‘human brains in a dish’.

The technique of growing ‘human brains in a dish’ – once deemed to be ‘unattainable’, is finally triumphed by pioneer neuroscientists, Jürgen Knoblich and Madeline Lancaster at the Institute of Molecular Biotechnology (IMBA) in Vienna, Austria. Their work, titled “Cerebral organoids model human brain development and microcephaly”, published in the prestigious journal Nature 2013 has sparked much interest in both academia and pharmaceutical companies who are eager to either observe brain development or to test out treatments on the new tools. These three-dimensional organoids exhibit characteristics of living human brains, overcoming problems arising from species differences (compared to animal models) and even afford personalisation specific to patients. However, these ‘early models’ of brain organoids still suffer from a few shortcomings. One of these shortcomings is that these mini-brains experiments are in vitro, meaning experiments conducted in ‘artificial’ environment which limit further extrapolation of results obtained to real life treatment. The biggest challenge is posed by the lack of blood vessels critical for supplying oxygen and nutrients, thereby putting a cap on the size the brain organoids can reach and likewise its life span.

Enter the folks at Salk Institute with an upgraded version of the brain organoids, published in an article entitled “An in vivo model of functional and vascularised human brain organoids”. For the first time, human mini-brain grafted into the brain cavity of a mouse is able to survive and integrate with its foreign surroundings in order to establish a functional neuronal network and blood vessels in the grafts. One of the tricks performed by the scientists is to “humanise” the mice’s immune systems, a strategic move so that the human mini-brain would not be attacked by immune cells. These latest brain organoids are truly a game changer, inheriting all the merits of the earlier versions of brain organoids and most importantly, the upgrades it possesses. With viability now having been extended to years, long term experiments to observe disease progression as well as preclinical studies designed to evaluate the effects of therapeutic compounds have now been made possible. The potential is limitless, especially in combination with other advanced technologies such as CRISPR-Cas9, the most popular genome-editing tool, which can really move the field forward. Who knows? In the future, organoids may become a viable option as ‘spare parts’ for repair in event of brain cells injury and damage.

The beauty in the work of Mansour and colleagues in Salk Institute is its remote reminiscent to the most elegant Nobel Prize (awarded in 1935) winning developmental biology experiment performed by Hans Spemann and Hilde Mangold in 1924 where the identity of an organiser of embryo development was determined through the grafting of the ‘organiser tissue’ from one species of amphibian embryo to another species of amphibian embryo. Developmental biology is in essence, the study of how organisms including animals (and plants), grow and develop from a fertilised egg (or a seed). Scott Gilbert, American developmental biologist and Professor of Biology at Swarthmore College has recently proposed that developmental biology is “the stem cell of biological disciplines”, that it is the precursor disciplines to genetics, cell biology, cancer biology, immunology and many evolving new field of studies. Indeed, since the last century, the field of developmental biology has seen major conceptual and technological advances, many spun off into exciting directions and fascination tools, for example the customisable human mini-brains.

Interested in studying developmental biology? We welcome you to check out our new Bachelor of Science (Honours) degrees in Biochemistry awarded by the University of Portsmouth (United Kingdom) at the School of Health and Life Sciences at the Management Development Institute of Singapore.