The 2010 Dead-End Collection was by far his most successful, where he produced a collection of garments using only one piece of fabric while moulding them in seemingly impossible ways. The jacket body in Figure 3 is made from a singular piece of fabric, combining the traditional 3 panel jacket via ingenious pattern cutting. The 2-piece sleeve is also made from a singular piece of cloth. The ingenuity in dart manipulation, the process of removing fabric to provide shape, to achieve structured one piece garments unique to Poell. The same ingenuity was repeated in trousers and footwear.

According to Chomsky, true human creativity will depend on several factors; the created product is novel while being adequate to the intended situation in which it is produced (D’Agostino, 1984). Meaning, a novel product that conforms to the analysis phase of the basic cycle of design. Poell has achieved the novelty while ensuring marketability. Because of the unique approach, the fit allows for ‘peculiarities’ such as having a narrow shoulder with wide hips or wide waist with narrow thighs on trousers. This may be seen as an issue with fit but not for Poell. For him, it is about breaking away from tradition and innovating silhouettes as “To be creative”, according to Sampson (Otero, 1994), “is to produce something which falls outside the class of any set of principles that might have been proposed to account for previous examples”. Using this viewpoint then, the created product is novel in the sense that is incompatible with any set of standards which could have been inferred from previous creative practice in the same domain. Poell has achieved this in his collections in a time where “nothing can be truly new” is preached.

However it is in footwear where Poell truly transcended in artistic vision in an area where traditional form and function is highly praised and valued. 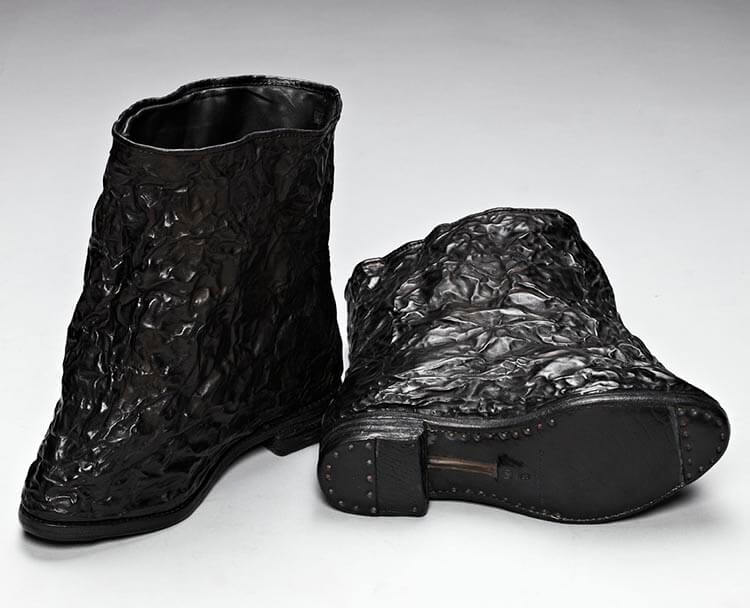 Figure 3.2 consists of one of Poell’s most conceptual footwear, a boot made from a singular piece of leather that is lined on the inside while encompasses a metal wired framework. This allows the piece of leather to be moldable into the shape of a foot which means no zips or laces are necessary. The function is the same but form is greatly changed. With this he has entered into a realm not many had ventured before. Like Wittgenstein said in his text, linguistic determinism claims the need for avoiding linguistic traps that invoke the human mind into creating from already created systems formed by previous thoughts and experiences (Kimball, 1984). Because by the very basic definition of a boot being “any sheath protective covering” (Dictionary) Poell has achieved a boot while still ignoring traditional boot making manuals which suggest the need for laces and a last (a shoe form that has a shape similar to an average human foot)

What Poell has done is firstly ensure he had a firm point of design while in the analysis stage, he sought to produce products that are conceptual while keeping to his traditional practice of tailoring. In essence, his garments are tailored to conceptual perfection; the fit is exactly how he intends for it to fit. His area of synthesis is unique, with his interest in uniquely formulated textiles and finishing with sharp tailoring. Like Kawakubo, Poell has a moldable methodology that lets his creativity be free without being grounded by principles set in education.