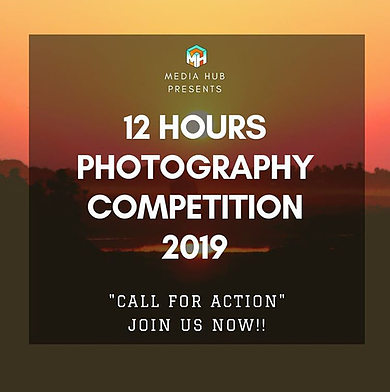 The challenge was in organising the event successfully.  The 12 Hours Photography Competition  commenced at 12 noon and ended at midnight with participants having 12 hours to click, edit and send the pictures.

Effective planning and budgeting assisted the team in getting things done ahead of the competition.  With Aditi and Gina leaving to Oklahoma for their residency programme, Jane (Vice-Head of Media Hub Marketing Unit) stepped in to assist.   With support from Media Hub’s Studio Officer, Mr Danial, the team worked on promoting and spreading the details of the competition.

Prizes for the event were – first prize Go Pro, second prize Instax Mini and third prize Gold Class movie vouchers.  Emails were also forwarded to registered participants, informing them of the briefing that was to be conducted on the morning of the competition.

On the day of the competition, walk-in registrations were also accepted, and details of the rules and theme were shared. The information was also flashed on Instagram live for international participants. At 12 noon sharp, the official announcement of the competition and the theme was announced.  The theme for Category A was ‘Urban’ and theme for Category B was ‘Psychedelic’.The team wished all participants the very best and was proud that all of their hard work had finally paid off. The First Photography Competition had set a benchmark for further competitions to come. Cheers to those who had helped in making this a great event!

The article is contributed by Devika Baburaj, who is pursuing the Bachelor of Arts (in Liberal Studies with concentration in Mass Communications) (prog) awarded by the Oklahoma City University.