It’s only natural for every country to have its own culture, establishing its identity and uniqueness. Some might say that that is especially prominent in Asian countries – Singapore has a lot of material to offer when it comes to culture.

Of course, there are many aspects related to this one word, and it would not be fair to mash all those vibrant shades into one article. Hence, Singlish.

Just some quick background information. Colloquial Singaporean English, better known as Singlish, is an English-based creole language spoken in Singapore. Spoken by the islanders, its vocabulary consists of a blend of English, Malay, Tamil and various dialects of the Chinese language. Unfortunately, it is not seen as a prestigious way of communication and is heavily discouraged by the government. It does, however, play a major role in making Singaporeans precisely that: Singaporean.

Personally, I think it is incredible how, despite the local government’s disapproval of the colloquial tongue, 27 Singlish words now sit in the pages of the Oxford English Dictionary; ironically nestled amongst words such as ‘disapproval’ and ‘colloquialism’ themselves. 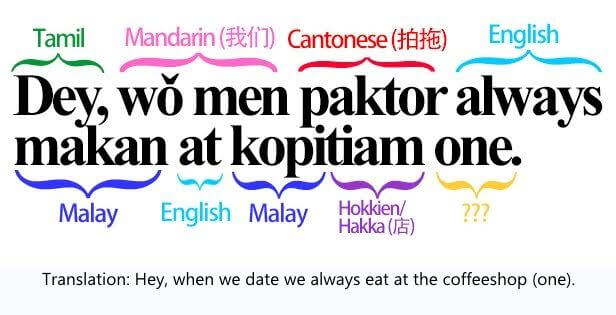 From ‘lah’ to ‘sabo’ (words that I’m fairly certain do not require explanation of any sort), there is a whole array of words now actually acknowledged and recognised by the people whose native tongue is English itself. Sure, I get that the usage of Singlish terms does make us sound a little rogue, and if I may, uneducated at times.

Let me just put out a disclaimer here that I am essentially Singaporean as well and have no intention of offending anyone. It cannot be denied though, that Singlish is a nationally recognised form of communication. Strangers asking “how to go Lau Pa Sat ah?” automatically tells any Singaporean that they’re asking for directions to the place.

To foreigners though, this strange accent seems really cool and their desire to pick it up and blend in is shown through their hilarious but sweet attempts. My best friend studied in an international school her whole life, and though her inappropriate slotting of ‘lah’ into her sentences makes me cringe heavily, it is still flattering to see her want to be able to speak it fluently.

While correcting her, however, I realised the different intonations and consequential meanings which could be derived from that single syllable.

Say it in your head (or even out loud if you want, it’s a free country), this one syllable but with different lengths. A short ‘lah’ could be equivalent to a ‘duh’, if you think about it. A long one, on the other hand, might communicate frustration at the other party’s inability to grasp something. Try it; trust me you’ll find it accurate.

Of course, there are many other things short and long ‘lah’s could mean when factors such as intonations come into play, but we aren’t in a classroom and this definitely isn’t a lesson.
Essentially, all I want to say is that Singlish inevitably does what a culture should do: establish and identify the entire nation as one, unique people. Next time you have a friend trying to speak like us and messing it up, please do us all a favour and teach them the correct way, because who knows it better than us?